Problems With the Scribd iPhone App as an Audiobook Player 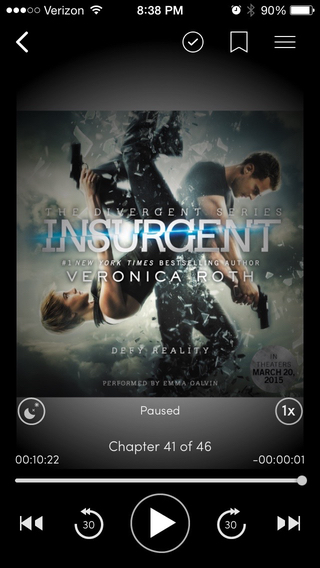 I have a moderate commute (moderate for Atlanta standards), so I listen to a lot of podcasts and audiobooks. I found out recently that Scribd offers a fairly large selection of audiobooks for a reasonable price, so I signed up for a trial to give it a shot. The user experience with this app has been so bad that I felt compelled to write up a list of its shortcomings here. Hopefully they can continue to improve this app as time goes on, but for now these reasons are keeping me from continuing my trial into a paid membership.

I know writing apps is not easy, but to me it looks like the problems with this app could be fixed with a couple months of solid iOS development time. Scribd has a good foundation built, and a rock solid iOS experience could really provide a good option in the audiobook subscription marketplace.

Side-note: Insurgent is kind of boring.

UPDATE (Aug 30, 2015) - I submitted this post to Scribd in a support ticket, and they admitted problems and told me they were working on the problems. I received another response when version 3.11 was released, and they very generously gave me some extra time on my account for free. I listened to another 1.5 books these last few weeks, and I will say that the experience is much better! However, there are still problems: